Posted by Lauren Stowell on October 03, 2012
Today I would like to share my experiences with ostriches. ... or... at least their feathers.

Ostrich feathers are not as straight-forward as one would think.  There are three different types of feathers you should know about:

Plumes
The elusive Ostrich Plume is the most desirable of all feathers.  We often use "plume" to describe any ostrich feather, but it is specifically the feathers that come from the wing of the bird.  They are typically 20-30 inches long, very full, and have lovely heavy ends that dip gracefully.  They're also the most expensive and hard to find.  Here is a plume:

Drabs
Ostrich Drabs are the most common ostrich feathers found in craft stores.  Drabs come from the ostrich's shoulder, and are about 10 to 22 inches long.  Compared to plumes, the fibers are much shorter, but are typically full.  Drabs make good, affordable hat decoration.  This is a drab:

Spads
Spads come from the tail of the ostrich, are about 18 - 22 inches, and are somewhat thin and spindly through the fibers.  Spads are the cheapest, but are the least attractive, although several spads can be combined and shaped to create a fuller, more drab or plume-like appearance (which I will be showing you in a moment).  This is a spad:

So...9 times out of 10, when you buy feathers at the craft store, you will be purchasing either drabs (if you're lucky) or spads.  These can be rather uninspiring, but luckily, you can work with them to create something that looks more like a plume.

I recently raided a local shop for dyed ostrich feathers at a great price, and came home with a selection of what have turned out to be thin drabs.  I have two of each color.  Here are the red: 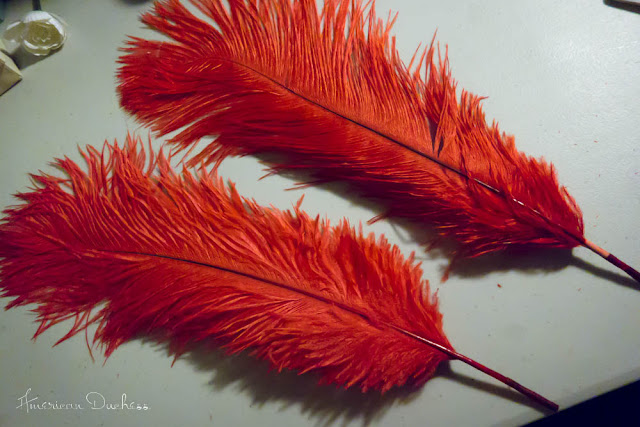 As you can see, they're flat and kindof messy and thin, so I will stack these two feathers together, one on top of the other, to combine their fullness.

The first thing I do is curve the quills.  You can do this with an open pair of scissors, by gently creasing the quill between your thumb and the blade of the scissors, all along the quill.  You don't want to make big creases - just every half inch or so, press the quill to the blade, all the way down, again and again, until the quill curves how you like.  Do this to both feathers before stacking them.

Now you're going to sew the quills together.  Use thread that matches, and punch holes in the quills.  This can be tough - I use a seam ripper, and go through at least the bottom quill.  You need to securely wrap both quills together at intervals, so the thread doesn't slip around.  Here are the ends of mine sewn together: 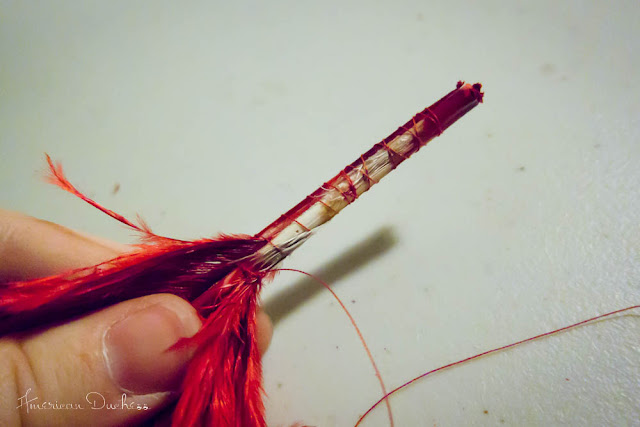 When you have the feathers sewn together, you may like the look of them already, but if they're a little out of control, like mine, you may wish to curl the fibers, to give the effect of a plume.  I used a small-barrel curling iron on a low setting, and curled the ends under.  You can see in this picture the LEFT side has not been curled, whereas the RIGHT side has:

With the whole thing curled and shaped, here is my result: 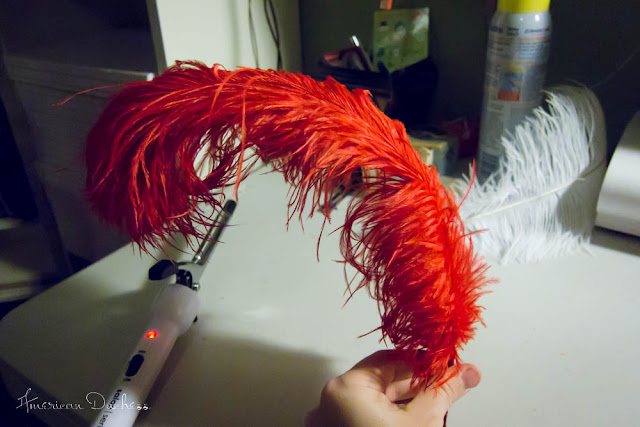 Now when added to the hat of your choice, this plume make a much bolder, authentic statement that just two spindly drabs or spads sticking out randomly.  Here is my red stacked "plume," along with a white drab, added to a bergere hat: 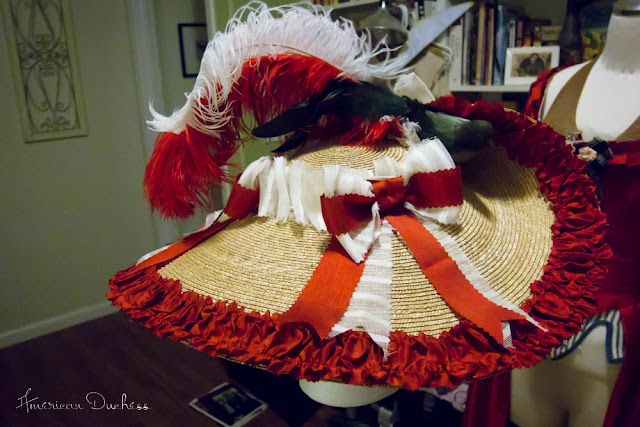 Ostrich Nandu (or Nondu) - these are trimmed spads that you can make yourself.  Just cut the feather into this shape:

French Plume - The most elusive and expensive of all ostrich feathers, French Plumes are not readily available today, and must be "built."  French plumes are constructed of many feathers stacked together and shaped through the quill to create the characteristic droop.  The ends are curled with a blade (similar to curling plastic ribbon), and the whole look is heavy and luxurious.  Vintage French plumes can sometimes be found on Etsy, eBay or RubyLane.com.