V234: What Kind of Heel Is That? A Quick Guide to Historical Shoe Heels 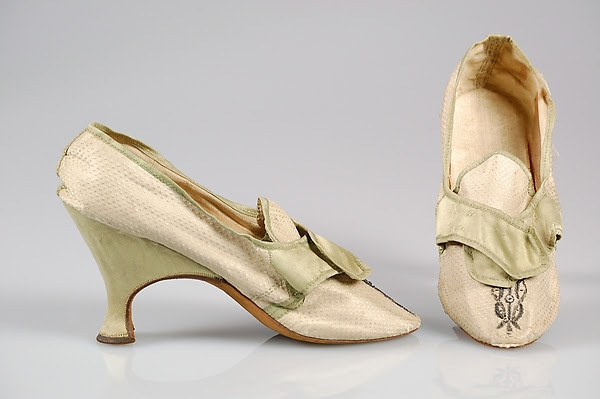 Following yesterday's post about why we no longer have proper French heels on shoes, I thought it would be good to add to and define some of the terminology, and create a little shoe heel guide.  So without further ado...

The French Heel
Also called the "Louis" heel, after King Louis XIV, the French heel features a curved "waist," with a flare at the bottom.  The front side of the heel (the "breast"), under the arch of the foot, has an inward curve, and the sole covers the breast, the arch, and down under the ball of the foot, in one piece.  The French heel remained the most popular heel shape and construction from the 17th century to the 1920s.  These are all French heels:
The Cuban Heel
The Cuban is a straight-sided heel often made of stacked leather or wood, but sometimes also covered in material, or painted.  Low and blocky, the Cuban is more commonly a "knock on" heel, which means the sole leather does not continue down the breast, but rather the heel is constructed completely, then attached, with no further crafting.  Cuban heels became popular around 1900, and were the primary fashion heel of the 1930s, alongside the Spanish heel.  These are Cubans:
The Spanish Heel
Spanish heels are straight-sided, tall, and tapering.  Most popular from the 1920s onward, the Spanish heel was typically constructed of wood covered with textile or leather, with the sole in one with the breast, like a French heel.  Spanish heels are taller and thinner than Cuban heels, and were sometimes called "spike" heels in the 1920s.  These are Spanish heels:

The Military Heel
Similar to and sometimes synonymous with the Cuban heel, the Military heel became popular for women in the late Victorian period.  It is low, straight-sided, often stacked wood, and broad.  Cowboy boots still feature Military heels.  Here are examples of Military heels from the past:

Opera and Kidney Heels
Opera and Kidney heels both have straight breasts and curved necks, or "waists."  They are similar to French heels, but are typically knock-on heels.  The Kidney is higher than the Opera.  Here are both Kidney and Opera heels:

Italian and Kitten Heels
The Italian heel was common for the 1780s and 90s, and featured a slender waist and small flare at the base.  A large wedge supported the arch.  The term "Italian heel" hasn't been in use since the 18th century, but has been replaced by "Kitten heel," a small, low heel with a sharp taper and sometimes a small flare at the base.  Here are examples of Italian and Kitten heels:

The Stiletto Heel
We're all familiar with these - the most popular shape of the second half of the 20th century and still today, the Stiletto heel was invented by Roger Vivier in the early 1950s, and uses a steel spigot encased in material (most often plastic, but originally, for a very short time, wood) for stability and strength.  Stilettos are characteristically very high and very thin.  These are stiletto heels:
The Common Sense Heel
Common Sense heels are low, broad, and usually stacked wood or leather.  This type of heel was very common on walking shoes of the mid-Victorian period, and still found today.  These are period Common Sense Heels:

The Platform Heel
Platform heels are not specifically a type of heel, but rather a type of shoe.  The platform is beneath the ball of the foot, elevating the entire shoe, which calls for an extra-tall heel.  In the 1940s, heels used for platforms were straight-sided Cubans or Spanish heels, as well as wedges.  Today, platforms are paired with Stilettos, Wedges, and huge chunky novelty heels.

The Wedge
Just as the name implies Wedge heels have no sculpting under the arch, but are one solid piece, very commonly made of cork, between the ball of the foot and the heel.  Wedges became popular in the 1930s, and were straight-sided.  Platform wedges are found in the 1940s and 50s, and the style has been ever popular through the 20th century and today.  These are historic wedges: