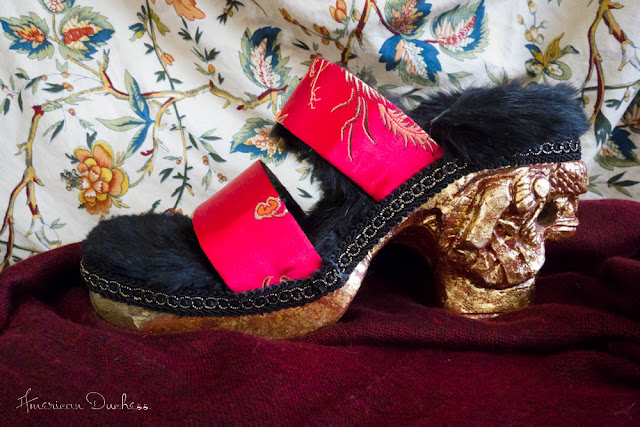 No, this isn't about baby shoes, but the first shoe I ever designed and made (with my own bare hands!), back in 2001, in my first university art class, Art 100, taught by Howard Rosenburg, at the University of Nevada, Reno.

My shoe has traveled around with me since, but only recently did I come across the original drawings for it, so I thought it would be fun to share, considering that, oddly enough, I ended up making shoes as a career.  Howard, I hope you're proud :-)

I remember the project so clearly - our assignment was to make a shoe, but as an "art object," so the shoe didn't need to be wearable, and we were encouraged to use unexpected materials.  I, of course, used completely expected materials, which didn't win me any accolades.  Where other students made their shoes out of melted CDs and beef, I went for wood and leather. 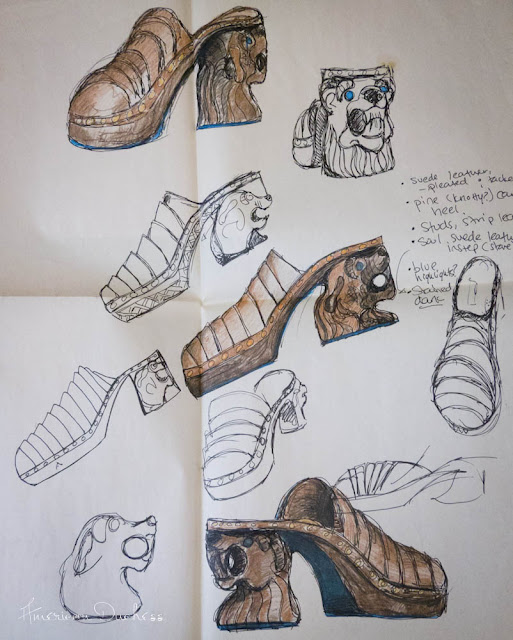 My original design was a Viking shoe, with the wooden heel carved as a lion-ish-dragon-ish head.  I used basswood from the craft store to carve the heel and footbed all in one, and acquired more than one scar trying to work the wood with hand tools.  I switched to a Dremmel tool to finish the lion's head, which worked *wonders* (if you're ever doing any wood carving, I highly recommend it), and applied a dark wood stain.

The problem was, well, Howard and the two other professors critiquing the in-progress shoes absolutely hated it.  I was critted (crat?) into a trembling ball of nerves, and ended up taking the design in a completely new direction after one of the profs said the head I'd carved looked like a Chinese fu dog, not a Viking lion-dragon-thing. 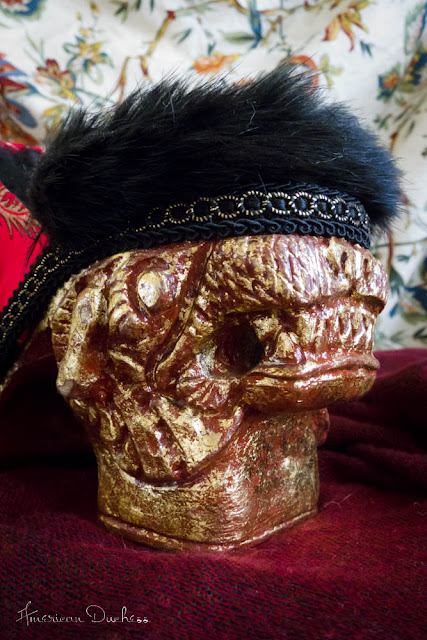 Following that thought, I re-worked the shoe into its final form, with Chinese silk sandal straps, black rabbit fur in the footbed, and a whole lot of antiquey-gold-leafy-stuff I found at the craft store.  At the final critique, I was still hammered (while, oddly enough, the shoe made out of whipped cream was fawned over), but in the end I got an A, and have kept my first shoe ever since, whereas I doubt the beef sandal and the whipped cream stiletto continued to exist much past the end of that day, eleven years ago. :-)
Miscellany Shoes Vintage365