Posted by Lauren R on May 24, 2012
It's been a long time since I've done a "Costume Analytics," but now is a good time to bring it back! This time we'll be looking at the famous Madame de Pompadour's Robe a la Francaise, gushing with lace, bows, and ruffles. 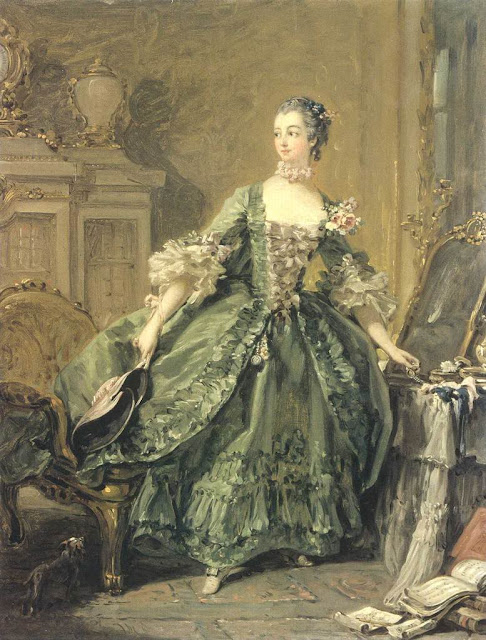 What I love about this painting by Boucher, c. 1750, is that it is not the typical Madame de P. portrait, of which there are many.  This painting is loosely painted, in a wonderful limited color palette, and is very "alive."  It helps that Pompadour is wearing an awesome dress, too! So let's take a look at this gorgeous green gown.

The Pattern
Madame de Pompadour is wearing a Robe a la Francaise, also known as a sacque, sack-back, or Watteau gown.  In the 1750s, these gowns were worn over large side hoops called paniers, which held the skirts out on the side, but allowed the drapery from the back to hang in a nice, flat cascade. 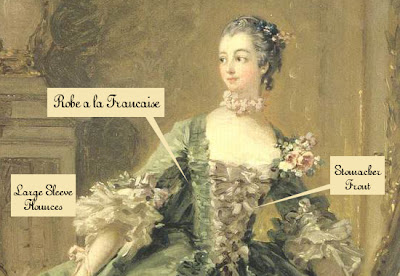 Robe a la Francaise gowns typically had a matching petticoat, like we see on Pompadour, and were worn over a separate stomacher that often contrasted.  Gowns like this one were open in the front, pinning closed at the sides of the stomacher.  Madame de Pompadour exhibits a busting breast of bows on the stomachers in many of her portraits, but a completely different stomacher could be switched out to give the ensemble a different look. 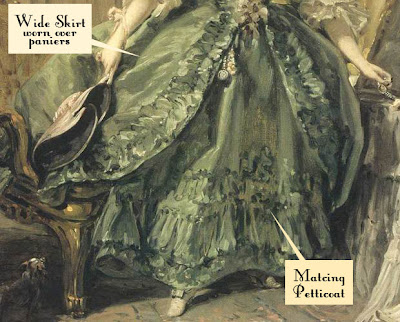 You will notice the enormous sleeve flounces Madame P is wearing - there are three separate ruffles, two of the lacy, fine fabric (the white), and one "backing" them of the same green silk of her gown.  Overall her gown is quite similar to this extant Francaise from Kyoto Costume Institute

Fabrics & Trims
Madame de Pompadour is wearing silk in this portrait.  There is no pattern or figure in the silk, and it was most likely taffeta, a "papery" sort of tightly-woven silk that creates structure and volume.  In the 18th century, silks were very tightly woven, and very high quality.  The sort of pinked trim we see on Madame P's gown would only have been done on a tight silk, lest it fray.

Aside from the overall fabric, Pompadour is also sporting very fine, almost transparent sleeve ruffles  It is difficult to tell in the painting what they are made of, but sleeve ruffles from this time were typically constructed of fine laces, and embroidered lawns and voiles.

Lastly, the bows on Madame Pompadour's stomacher are probably silk ribbon, much like this gown from the Kyoto Costume Institute

.  However, bows could also be cut from contrasting fabric, with pinked edges.

Accessories
Madame de Pompadour really knew how to complete her outfits with accessories.  She was famous for her hair stylings, designed and executed by Legros de Rumigny, but also sported the iconic lace choker we so associate with this period in France.

Pompadour is also wearing a rather large bouquet at the shoulder of her dress, as opposed to at the center front, which comes along later.  Dangling under her stomacher point is a chatelaine, which would have included items like a watch, needle case, possibly keys, scissors, etc.

Pompadour is standing at her dressing table, grabbing a piece of jewelry (a bracelet?) on her way out.  She has an interesting hat in hand, what appears to be a bergere style straw hat, a very popular "shepherdess" style hat typically trimmed with ribbons and flowers.  Madame P's looks rather simple, surprisingly, in comparison to the rest of her costume.

Lastly, Madame de Pompadour has on some very tiny (she was always depicted with teeny tiny feet), pointed shoes, with Louis heels and silver buckles.  These types of heels even came to be known as "Pompadour heels," and remained popular until the 1760s.
Tips on Making This Costume