Do you want Search?

The Guilt of the Feathers
Sitting amidst my piles of rooster feathers, I come to realize that I feel guilty about the purchase of them. The desire to create the most fantastic over-the-top costume I could imagine outweighed the need to save money and spend thriftily. It had to be real feathers, and by the bucket-loads, for I convinced myself that nothing less would do, and that I deserved to have the best and most fitting of materials.

However, here I sit with my piles, certainly excited for the outcome of the owl robe, but also equally excited for “the aftermath.” I have decided that 2010 will be the year of Extreme Budget Costuming.

Rococo Backlash and the French Revolution
While marked most prominently by the Guilt of the Feathers, I have also sensed an overall shift in my aesthetics, trickling through to all areas of my design life, from costuming to home décor to my occupation of product design. I am beginning to adhere to the concepts of simplicity and perfect design, as opposed to, well, Rococo.

This shift in aesthetic sensibilities is very reminiscent of the sudden change in the 1790s, between the explosively frou-frou styles of the earlier 18th century, and the “new” Classicism that took hold in response. During this period, France suffered not only conspicuously-consuming monarchs, but a food shortage caused by abnormally ill harvests. This resulted in the French Revolution, which demolished the French monarchy as well as aristocracy, and created a backlash against all things associated with the upper class, including clothing. 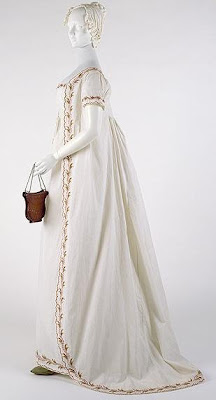 The 1790s were an odd and since unmatched period in clothing. Old and new styles, varying extremely in cut, fashion, and textile, could be seen walking down the street together. It was as fashionable to wear a tight-closing silk gown at the natural waist as it was to sport a thin muslin gown with a rising waistline, the precursor to the ubiquitous empire waist of the Regency. Soon, though, the thin cotton gowns, simple in cut, print, and trimming, were the mode, and any remnant of the Rococo was stamped out.

A Sense of Frugality
This bit of history is not unlike the situation in America today. A period of excessive, fatty spending has come crashing down, replaced by a far greater sense of frugality. A populace unhappy with its leader has replaced him with a more radical one in hopes that he will make sweeping changes. Consumers are spending their hard-earned dollars on quality, not quantity, if they are spending at all.

Undeniably this affects the historical costuming world. Stories of white silk Renaissance Faire gowns drug through the dirt, of a new gown for every monthly ball, of $75/yard cut velvets now seem ridiculous and appalling. Is it really so bad to use synthetic taffeta in place of silk, if it is only the look you are going for?

All this being said, I feel it is time to take a step back and reassess our costuming goals. It is my belief that fantastic, period-accurate (in cut, color, and composition), impressive, over-the-top, drool-worthy costumes can be achieved for teeny tiny prices. This involves hard shopping, waiting for sales, clipping coupons, and hunting down those foxy bargains. This involves learning to pattern, alter, and drape for yourself, to avoid buying patterns. This involves using up your stash, recycling old sheets for linings, remodeling costumes of former glory, making things by hand, and even cannibalizing old digs to recycle the hardware for new ones. Sacrifices and compromises will be made, but that is part of the challenge!

American Duchess’ 2010 Depressionista Challenge
The 2010 Costumer’s Challenge, should you choose to accept it, is to create your fantastic ensembles for under $75! There is no limit on the number of costumes you can create, only on what you can spend per outfit. Often the basics of an ensemble – bodice, skirt – are all we think about, and forget about how much we’re spending on the trims, underpinnings, hats, purses, gloves, feathers, beads, all those little extra items that finish off a look perfectly. Those count in your $75 too, so be sure to budget!

Look for future articles on how to recycle, refurbish, reuse, and SAVE on your costuming. Your comments and links are always appreciated, so please leave them in the comments section below!

Wolfie and Woffington Give a Nod to Lil' Duchie

American Duchess is an independent maker of fine historically-inspired footwear and accessories.