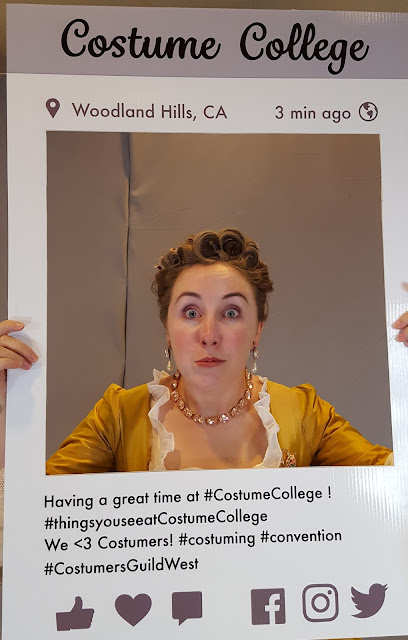 Doesn't it just feel *so good* to best a cranky project, wear it, and love it? I'd been working on my yellow English Gown for most of 2016 and it just fought and fought and fought me, but even with emergency fitting the night before Costume College, I somehow finished this beast, wore it to the Gala, and felt very pretty, if not very.....very....yellow.

This gown started out as the Larkin & Smith English Gown pattern, which is dated 1760s-1770s. I realized that this is actually the first paper pattern for an 18th century gown that I have ever used, so it was an interesting experience. I started the pattern quite a long time ago, but then it landed in the UFO pile for quite some time....long enough for my waistline to grow rather, um, a lot, so when I picked the project up again, I had some serious fitment problems.

Enter the piecing, a very historically accurate way of making $*&% fit. I added my pieces at the side back seams. Now I'd like to say that solved all my problems, but no.

It was at this point I went really, really off-pattern. Instead of single robings, I used a double fold-over, which took quite a lot of fitzing and futzing to get on there right. In the end, my robings came out a little short - oh well - but in a very "V" shape, which I like, rather than the broader shape of later styles.

Now, I wanted this gown to serve as both a 1740s day gown and a 1750s evening gown. To do this, I made a plain ivory silk stomacher for the '40s, which would be covered entirely with the neckerchief, and a decorated stomacher in the yellow silk for the '50s.

I had planned to make two petticoats, one plain and one decorated, but ran out of silk, so I did the decorated/flounced style of '50s, but covered it with the very long and wide whitework apron of the '40s.

I was feeling pretty chuffed about getting the gown done in time for Costume College. It was time for The Big Try-On before packing everything, and good thing I did because guess what.

I COULD NOT GET THE GOWN ON.

I had made a new chemise for all the '40s and '50s stuff I was wearing for CoCo. The reason I did this is because the chemises of the earlier 18th c. are significantly different than the 1770s and 80s, with full sleeves that extended below the sleeve cuffs and formed a puff. Unfortunately for me, this style of sleeve didn't fit in the much narrower sleeves of the 1770s. #panic

If ever I have been glad I hand-sewed something, that moment was it. I used The English Stitch ("weird running whip stitch") on the sleeve seams, which made it ridiculously easy to pop them open and stitch in a couple HUGE gussets. It took all of 20 minutes and suddenly not only did my chemise sleeves fit in there and form the perfect puffs at the ends like they should, but the entire silhouette of the gown became correct. Now it looked like a 1740s/50s gown. I didn't realize quite how important those broad, full sleeves were to getting the look right!

Fast forward to the night of the Costume College Gala. I was still having reservations about this ridiculous yellow dress. I just wasn't sure it was really going to look good at all.

Maggie did my hair, and I got some pink jewelry from Dames a la Mode. I put my shoes on. I put the dress on, pinning the stomacher in place. I put my pale foundation and strong rouge on, then checked the overall look in the mirror and at that moment I felt like a princess. I felt great!

And I continued to feel great, even in the shadow of some of the most stunning gowns I've ever seen. What a night!

So it was a journey, this gown, and it barely resembles the pattern from which it started, but in the end I was so happy with it, and so glad I did finish it and got to wear it. I hope you all like it too!

p.s. I have much to share about the 1740s daytime version of this dress. I wore it for all of two hours on the last day of Costume College, so I don't have any good photos (please excuse the dark photos above), so a photo shoot is in order.
1740s-60s English Gown 18th Century Costume College Events