And It Was All Yellow...

Posted by Lauren Stowell on June 13, 2016
You're going to think I'm all-over-the-place right now, and you would be right. Projects here, projects there, moving house, moving business, omg! It's been stressy, for sure, but this is also the typical lead up to Costume College...SEW ALL THE THINGS!

This year I feel extra on the back foot with getting stuff done for Costume College. I have SIX classes to teach, three of them 18th century focused, and on top of that the decisions on what to wear for evening events, most notably the Gala.

At this point it's mostly a "what do I have that's closest to completion and Gala-appropriate?" That would be the yellow English gown I've been working on for way-the-heck-too-long, so that's what I'm going with. That's what I need to finish!

I *have* been working on it, I swear. There's one sleeve basted on; the other is ready to go on. I need to work out the robings, especially since the gown is, um, a bit too small for me now. Then it's petticoat, stomacher, and accessories. That doesn't seem like that much left to do...right?

I ran into a little conundrum, though.

I wanted to do winged cuffs for this gown. I've always loved them and jumped at the chance to add them to this earlier style. In my research, though, I found that winged cuffs, found primarily in the 1740s and 50s, accompanied untrimmed gowns. The "fluff" was in the accessories - neckerchiefs, chemises, aprons, caps - but not on the gowns themselves.


Fast forward to the 1760s, and we get English gowns with trimmed robings, fluffy stomachers, and decorated petticoats, but most commonly flounces on the sleeves. (also plain, untrimmed gowns with flounces) I found one example of winged cuffs being worn with a trimmed stomacher, from c. 1760. This cheerful lady:

So I've had to juggle my plan a bit, but because I like things to be as versatile as possible, I've decided to make a Double Period Dress (to use a term coined by Your Wardrobe Unlock'd). 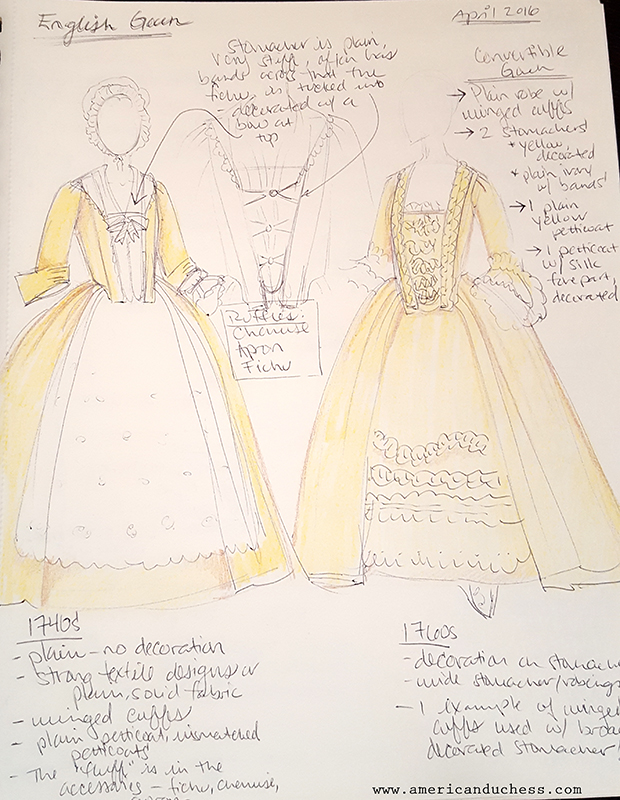