Posted by Lauren R on September 03, 2009
The main question on my mind as of late has been "What does the jacket do in the back?" Obviously there is an extant, existing garment, yet no one except the lucky people at the Kyoto Costume Institute, seem to know or are willing to share what EXACTLY happens back there. A peplum? A tail? A frilly something-or-other? Pleats? Kicks? A point? Nothing at all!?

So I've gone off on a mini-trek to take a look at similar garments, and to determine for myself an answer or two. Here is what I've found: 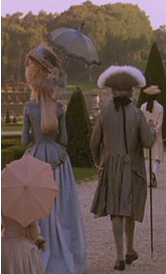 The Affair of the Necklace

The character Marie Antoinette wears a re-creation of this jacket, done up quite beautifully. The costume director chose a peplum with three box pleats, that fans out over the back of the skirt.

I think this look is absolutely smashing. 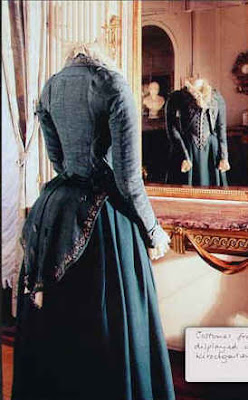 I have not seen this film, but it looks to be awesome in terms of costume and HAIR (zomg!)

From the photo here, it looks like the jacket was done up in linen instead of silk, and they've done a long tail down the back.

I know this tail thing to be period, but this looks too Victorian to me. It is difficult to tell from the picture, but it looks like the tail comes to something of a point, and it box pleated at the center, with two self-covered buttons to "hold it closed" as decoration. 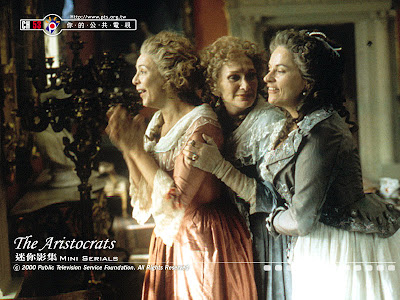 Another one I haven't seen, but from this picture it appears to be a ruffled peplum at back, with the self-covered, embroidered buttons carrying all the way around.
There is a seam at the waist, and there does not appear to be a point at center back.
Thus far I like this option the least.

Though almost always exaggerated, fashion plates do reflect the fashion and ideals of a time period - if not more ideals than actual fashion. They are excellent sources, since you get the whole length of the costume.

These two show 1790s jackets, both with tails/peplums/kicks at the back, which leads me to believe that there is indeed something at the back of the KCI jacket, not just a point or a straight edge.

The first of these two, though difficult to see, looks to me that the curved bottom edge swoops back into a double or triple box pleat at center back. 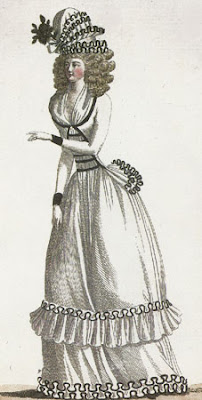 The black and white sketch looks more like a zone-front bodice than a jacket, but still exhibits a tail that looks to be gathered into a very ruffly ruffle.

I think this black and white gown is on the more fantastical edge of fashion...then again, there were some pretty bizarre and amazing things going on in fabric in the late 18th c. 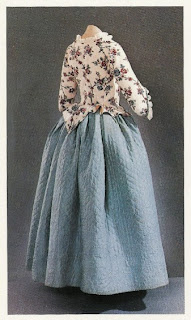 Neither of these examples are from the 1790s, but I believe that it is important to know what came before in order to solve the mystery.

This first jacket dates 1775-1785, and features a long point in back. The two tabs on the side back are split from the middle piece, and flare out over the skirt quite nicely.

This 1785 jacket features a peplum with an attached ruffle trim. This is very similar to what we saw with "The Aristocrats," although this peplum is all one piece with the bodice back and side 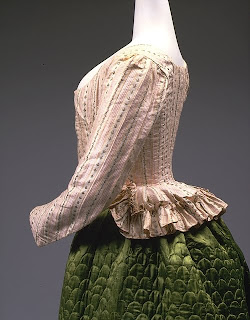 
So you can see we have some options!! And a LOT of work to do...
18th Century Research