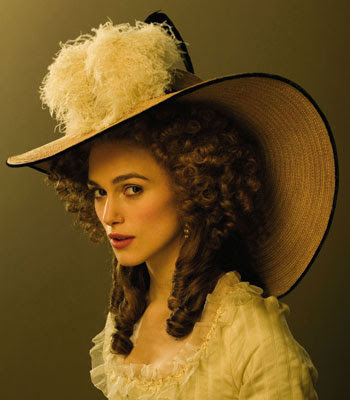 ...That's "GREAT" as in Great Dane, Great Blue Herron, and the Great Wall of China. With mountains of hair exploding from the tops of ladies' heads throughout the 18th century, it made just as much sense to crown the summits with equally awesome and large hats.
I've compiled a small collection of images, mostly from modern films, and a few period fashion plates. I encourage looking at [decent] period films because often times the costumers take the period styles and alter them slightly to make them acceptable to the modern eye. It is also easy to see how a costume or accessory will look "in action," in a setting, and on a real person, whereas fashion plates and illustrations typically give skewed and stylized vignette. These images are from "The Duchess," "Marie Antoinette," and "The Affair of the Necklace."

That being said, fashion plates are still the primary source and invaluable when it comes to period-correct fashions. Just as we find in today's runway shows, however, sometimes fashion illustrations of the past can depict what was then avante garde clothing, stuff people typically didn't wear. Nevermind all that if you're going for the Duchess of Devonshire, but it may be null en void if you're looking to dress as a servant or merchant's wife.
But how much fun would that be? This wouldn't be *American Duchess* if our wigs were reasonable and our hats mere sunshades!
Also in this post we'll cover online sources for Great Hats and other costumey head-coverings. It'd be nice to have acccess to the Hollywood costume shoppe, but we commoners must find these things for ourselves. The good news is that most of the hats are not custom made, but use a basic shape or a basic form that *is* available....if you know where to look!
And so, without further ado, GREAT HATS:
The Shallow Crowned Straw Hat 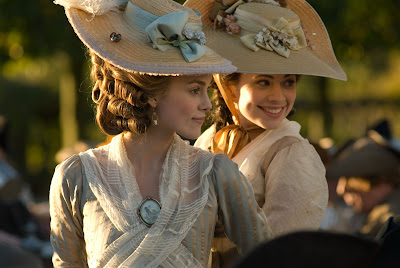 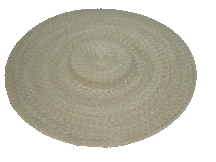 Two lovely hats from "The Duchess." Both look to be fairly shallow in crown, and curved down at the sides. The further one is turned up at the back. Both are trimmed with feathers, flowers, ribbons, and secured to the head with a hat pin. Never you fear: hat trimming how-to's in the future! If you like these styles, take a look at this hat from top-hats.com.


Another example of this hat is shown below, from "Dangerous Liasons." 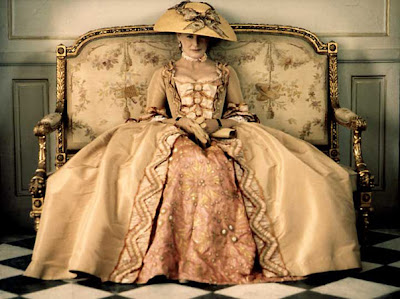 Variations on the shallow crowned hat include turning up one side , or turning up two sides (to make a bi-corn). It appears that ladies seldom wore tri-corn straw hats, but I wouldn't put it past them. Some variants are show in "The Duchess" and "Marie Antoinette." 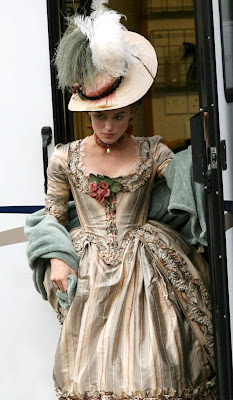 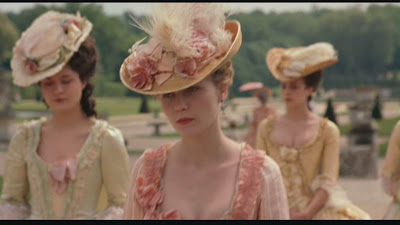 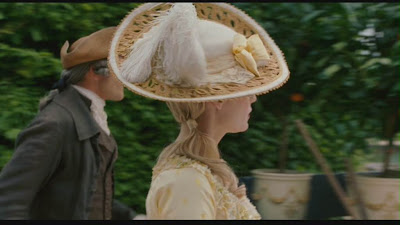 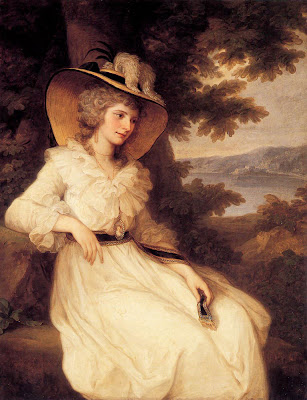 Another Great Hat, seen later in the century, known today as "the picture hat." I'm sure it had a proper name back then (as all these do). I liken this most to Kentucky Derby or Ascot hats still worn today. The hat in the portrait inspired a huge picture hat in "The Duchess," seen at the top of this article.

If you like this style, the best priced do-it-yourselfers I've found are at Berkeley Hat. The two shown here are the "Wide Brimmed Straw Picture Hat" (black), and the "Women's Big Wide Brim Derby Spectator Hat" (black and white). Both come in different colors. These hats can be easily decorated by trimming the edges, tying on wide ribbons and bows, and attaching a multitude of feathers. Like the Shallow Crowned hats, keep them on your head with a hat-pin, or with a ribbon tied under your chin.

Both of these hats I have found to be affordable, both under $40. However, if you love hats but hat trimming isn't your thing, and you'd just rather buy a huge hat already made up, check out LadyDianeHats.com for some particularly righteous custom-made headgear.
The Bonnet 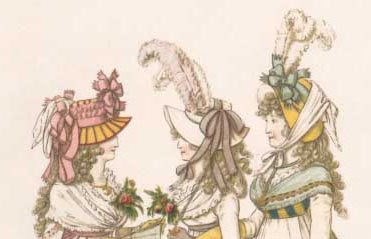 Getting on towards the turn of the 19th century, bonnets began to make an appearance, and wouldn't leave for the next sixty years or so. Unfortunately, Regency style bonnets are terrifically hard to find. Once source, if you don't mind paying a lot, is Mrs. Parker's Millinery & Mercantile, which custom-makes bonnets of all 19th century periods. If you're

looking to make your own, you can start with a basic form, available from Top-Hats.com.

Bonnets can also be made from scratch, using a pattern like this one from McCalls (M5129). Another pattern from Butterick (B4697) contains many different styles of hat, one a bonnet and one a picture hat, which could come very in handy. Patterns will build the hat inside out with buckram and other millinery materials, which gives you maximum control over the shape and size, but it also takes the most time. Most patterns, unfortunately, are for shapes of bonnets that are too late for the Regency period, but with a little crafty tweaking, adjusting the shape should be no problem at all. I do not recommend pattern-tweakage for beginning costumers! 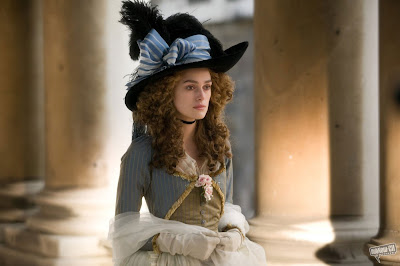 As of yet, I have not found a source for hats of this shape. My guess is that you will have to make it using an existing deep-crowned hat, wiring the brim, and beating it into the shape you want. It is difficult to tell just what is going on with these hats from "The Duchess," but it appears that the crown is very tall and slightly connical. The brim can be straight, turned up on one side, or turned up on two sides (bi-corn). If anybody knows where to find such a monstrosity, or has made one, please leave a comment!

Did I cover all the fabulous hats of the 18th c.? No. I covered a few styles that I've found to be awesome and doable, based on hats I've sourced from across cyberspace. There *will* be hat tutorials and more resources in the future, though, never you fear!

But if you just CAN'T WAIT to jump right in to hatmaking, here are a couple splendid dress diaries I've found:

If you know of any more (and there are definitely more), feel free to add them in the comments.