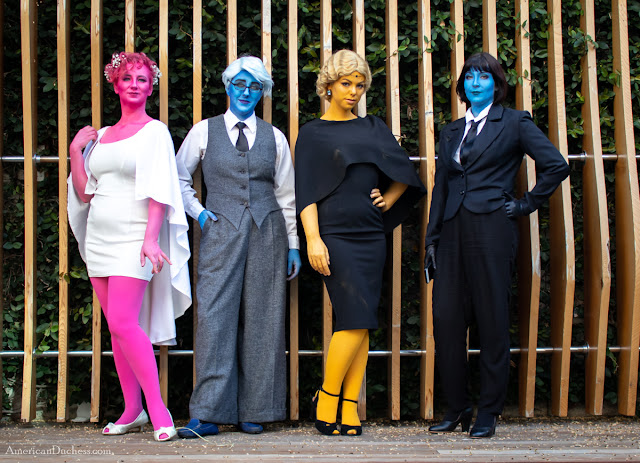 Back again with more sharing from Costume College 2019!

Each year there is a pool party on Thursday night to kick off the Costume College weekend. The theme for the pool party this year was "Garments of the Galaxy," which could mean any number of things, and opened up a...um...galaxy of creative opportunities. There were Star Wars and Star Trek characters, nebulous vintage dresses, Dr. Who and Marvel outfits, and so much more.

Somewhat on a whim, the AD crew decided to go as characters from a favorite webtoon called "Lore Olympus." (This was Nicole's fault; she was going to low-key go as Hecate and not tell anybody, but she let it slip at dinner one night, and it was all downhill from there).

Lore Olympus, by Rachel Smythe, is a creative and beautifully illustrated re-telling and re-interpretation of the myth of Persephone and Hades, along with many more of the Greek gods and goddesses and parts of their stories. The characters are dressed in modern clothing but each have bold, colorful complexions, making parts of this cosplay very easy and other parts much more challenging.

The clothing was easy to find, much of it from our own closets. The makeup was on the complex side (well, for those of us uninitiated into the magical world of theatrical maquillage). We used Mehron Makeup Paradise AQ Face & Body Paint cake makeup in about three different shades for each color, to do the base, shadows, and highlights.

Additionally, pretty heavy eye and brow makeup, various glittery products for cheekbones, and strong lip colors completed the transformations. For limbs, Abby and Chrissy wore opaque colored tights and applied the Mehron makeup to their arms. Abby went a little further and dusted herself with gold glitter, which promptly covered everything she touched, her entire dress, and began somehow multiplying in her palms.

Chrissy and Nicole wore their own hair (yes, Chrissy's hair is pink!), but Abby and I went the wig route. My go-to place for cosplay wigs is Arda Wigs, which offers a ton of colors. They're very easy to dye and style, too.

For Hades I didn't have much choice (almost everything on the Arda website was sold out - con season, yo), so I didn't get the skin-top mostly-there white wig I was hoping for, but I made it work with a Kyle Classic in pure white. I have minimal experience in restyling wigs, but Arda has a ton of helpful tutorials on their Youtube channel, and I've done a smidge of this-and-that over the years with dyeing and re-shaping synthetic hair. Hades' hair is a tricky style for a full-coverage, hard-front wig - really short in back and up off the forehead in front - so I ended up with kindof a feminized version, which worked just fine short of dyeing and cutting my own hair. I mixed blue-grey acrylic paint into rubbing alcohol and brush it on with a toothbrush, to dye the white hair and give the wig some dimension. Then I cut it (experience cutting a dude's hairstyle: 0) and shaped it by clipping sections into place and hitting them with the garment steamer, which works like *magic*!

Short of going on and on and on about how much fun we had and how awesome it felt to be blue all night, here's a short little video of how this all came together:


Here are some more photos. Why the heck not: