In my journey of studying and recreating old-fashioned footwear, I get to geek out on old technologies re-discovered. I just love the how and why of things: the effect an innovation in footwear manufacture had on industries, communities, and individuals in different time periods.

So I get majorly tickled when I come across artifacts that instantly answer questions we face from our customer's today. One of those questions is about buttoning shoes and boots - how did they, and how do we, make them fit?

My answer is always the same - move the buttons - and in our modern world, that means stitching them on. This was done in the 19th century too, but we also know that there were different attachment methods, evident on original examples. I have antique button boots with brads, pins, and staples holding the buttons on, so imagine my utter nerd-glee when I found the tools used for one of these methods.

This tool - a kit, actually - is the Paragon Home Shoe Button Kit. It's amazing to have the entire thing in-tact, because it tells us so much much more than if each piece were isolated. On the box is a diagram showing what the kit contains - button setter, wire cutter, button fasteners (the staples) and three colors of boot buttons - and how to use the button setter tool.

The button setter is marked "Bernard's Pat. Mar 17, 1914" on one side, and "W.Schollhorn Co. New Haven, Conn." on the other. A quick spin through Google Patents brings up William Bernard, the inventor of a great many punches, clippers,  pliers, and hand tools, working with the Schollhorn Company. Here's the original patent US1090191 A, and artwork: 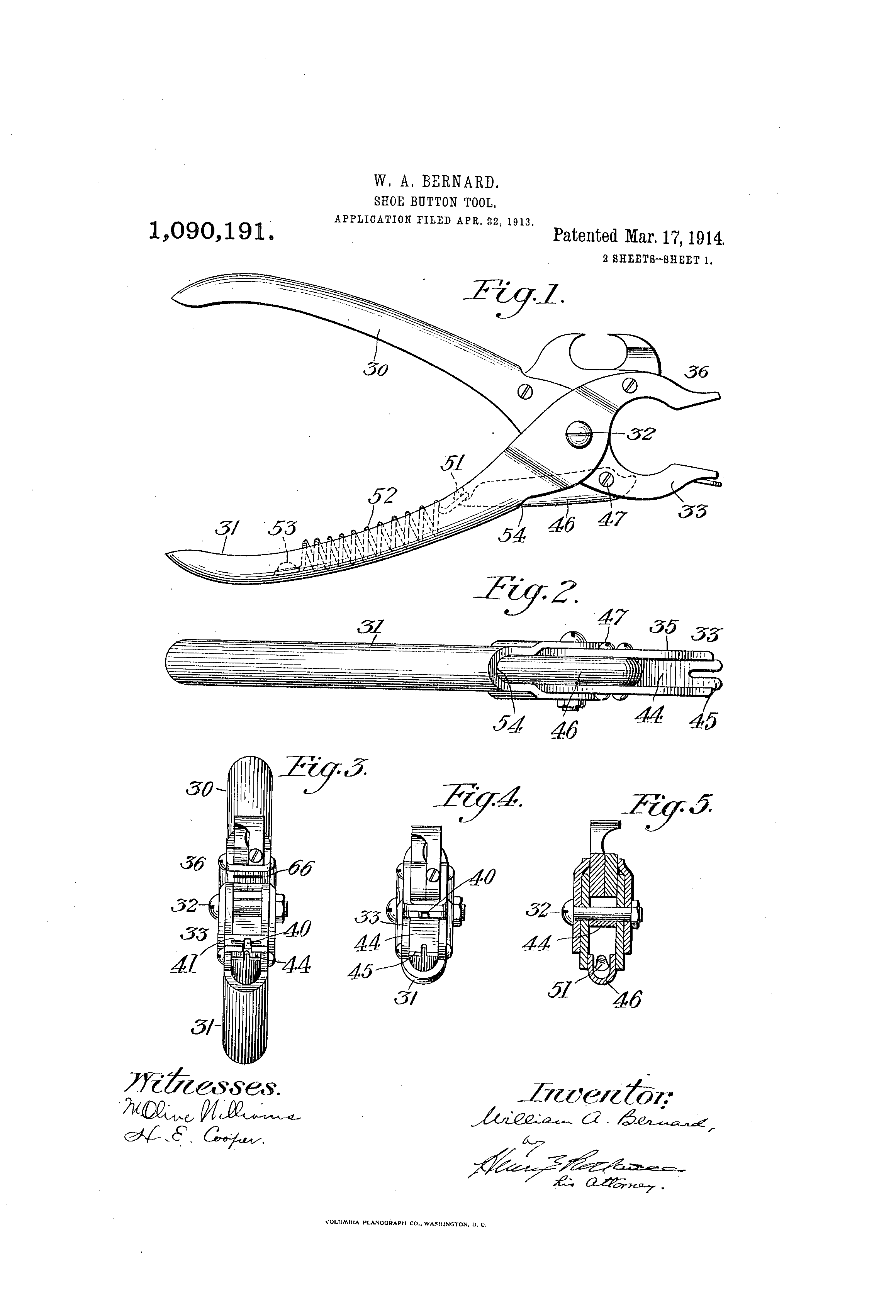 (Another little super-squee moment here is that we can more accurately date boots that use this method of attachment to around or after 1913/14, when this device was invented)

Inside is each component in a separate box. The tools are well-made and easy to use. This explains the consistency in shoe and boot button sizes and make, and why one could purchase cards of them; it explains why you see certain types of holes in antique boots, where the buttons have been moved; it explains why some boots have button colors that don't match; it reveals that women were adjusting the fit of their boots themselves (the box says on the side "This Paragon Kit is especially designed for home use.")

These tools really are a lost technology. Nobody is making these kits today - of course not, when shoes and boots don't button anymore - but how important this auxiliary artifact is to understanding how people used their boots in the past!

(You can sometimes find these kits on Etsy or eBay, varying in price. The pliers will work with the buttons in the kit or those of the same size/type, readily available also on Etsy and eBay, but will not work with the buttons that come with any of our buttoning shoes - different size and type. However, there's no rule that says you have to keep the buttons that come with the shoes. If you're thinking of moving the buttons on your Tavistocks, et al, it would be quite the experience and be quite unique to replace them with actual antique boot buttons set using this tool.)

I do wish these kits were still being produced, though, because it'd make moving the buttons on your Tavistocks, Renoirs, or Astorias so much easier. (Edit: the patent IS expired, but re-creating this kit would be incredibly expensive in today's world) As it stands, though, it's not hard to do it the extra-old-fashioned way with the needle and thread. Here's how: