Posted by Lauren R on April 11, 2012
The other day I thought I'd pop down to the thrift store and find a little blazer to cut up and make into a functional, although not historically accurate, Spencer jacket.

I didn't find one.

Instead, I pulled out some stash fabs and an old "I'm So '90s" Butterick pattern, with the idea of just throwing something together.  Instead of the straight, puffed sleeve that came with the pattern, I went with my go-to shaped sleeve, commandeered from Simplicity 4400.  It has magical "fit in that hole" powers - thanks, Simplicity!
Here's the result.  I cut the thing off at the empire waist, added a band, there ya go.  I like the military-inspired buttons, not sewn on here...still have to make up the proper covered buttons, lol, these are just stand-ins. 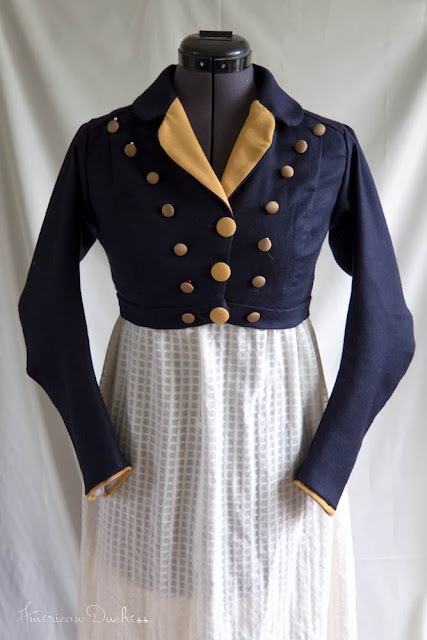 So no, it's not historically accurate, but I love it regardless.  It's an example of how to take a modern pattern and style it in a period way, for anybody out there looking to experiment with historical fashions, but intimidated by jumping right into period patterning, techniques, and tailoring.
Regency Regency Spencer Vintage365