On Location at Bacon's Castle - Journey to the 17th, 18th, and 19th Centuries

Posted by Lauren Stowell on May 07, 2014
While I was in Virginia this past March, I had the opportunity to work with some truly wonderful ladies at a very special place, to create imagery I hope conveys the love of history we all have.

The ladies were Lauren Marks, Maggie Roberts, and Samantha McCarty, or as you may know them better, The Lady of Portland House, Undressing the Historical Lady, and The Couture Courtesan.

The location was Bacon's Castle, one of the oldest Jacobean structures still standing in the Western Hemisphere, and the oldest datable brick building in Virginia. Bacon's Castle was built in 1665, with a second addition added in the 19th century (with very little attempt to really integrate the two styles). The older part of the manor house is a stunning example of 17th century architecture, with multiple chimneys, wood-paneled rooms, and the most amazing light I've ever seen (there's the photographer in me speaking). 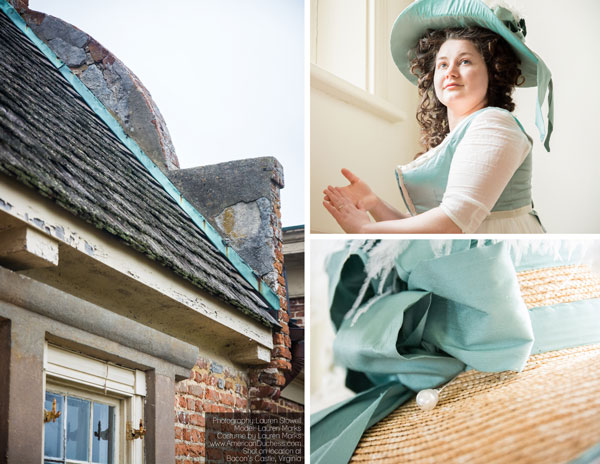 The day was wet, with mists creeping across the open fields, creating an eerie feel straight out of zombie flick. Bacon's Castle stands like a folly in the middle of a vast open space. It's a strange contrast to find such a noble monument, with all the importance and rarity earned by 350 years of existence, standing completely unaccompanied, with no fanfare of entry, no surrounding, well, anything. This strange positioning gave the place a surreal presence, and we all willingly entered the dreamworld and regretted having to leave again several hours later. 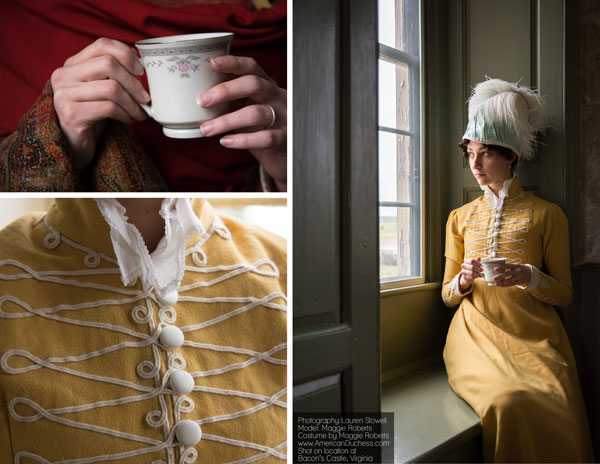 The ladies dressed in their various centuries - Lauren M. in 1790s, Maggie in Regency, and Sammy in early 17th century. It was a poignant reflection to know that this place had stood through all of these periods, with the daily lives of real people of these centuries floating by with normalcy and expectation. It boggles my American mind to stand in a structure so old, and attempt to imagine the many, many souls who walked through this place as their home, their place of work, and today as a tourist attraction. 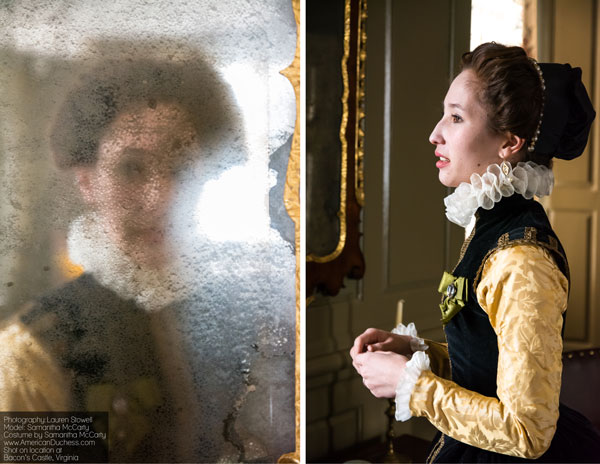 And Bacon's Castle is truly impeccable, truly stunning, be it on a bright Summer's day, or in the haunting fog of early Spring. The site holds all manner of event - fox hunts on horseback, historic cricket matches, garden weeks, high teas, archaeological digs and presentations on their findings, Bacon's Rebellion itself, and a Guy Fawkes Night bonfire, to name just a few. If I lived nearby, I would be a permanent fixture, such was the effect Bacon's Castle had on me.

To find out more about Bacon's Castle, plan a visit, learn about upcoming events, or plan an event (yep, they are very open to this!) check out Preservation Virginia's website, and Bacon's Castle on Facebook. You can also email them at [email protected] or give them a call at 757-357-5976.


Each of the ladies designed and made their own gowns and hats.
The Lady of Portland House paired her outfit with "Antoinette" 18th c. Mules in blue.
Mrs. Roberts wore "Hartfield" Regency Boots in ivory, for her traveling attire.
The Couture Courtesan completed her ensemble with "Stratford" Elizabethan Shoes in oxblood.
16th Century 17th Century 18th Century Photography Regency Renaissance Shoes