Posted by Lauren R on July 17, 2009
What is one way to save literally barrels full of cash on your out-of-control costuming habit? Remodel, revamp, reuse, recycle, and refurbish your old gowns into brand new ones!

Remodeling gowns is extremely historic. Many sources mention the re-cutting of bodices, or construction of news ones by taking fabric from the skirt. There are also extant period garments that are documented to have been made from much older fabric, such as this one from the Kyoto Costume Institute: 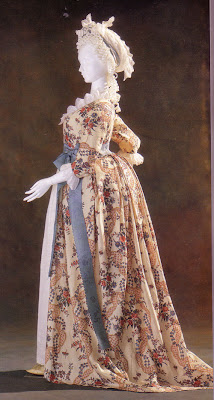 So why not do it ourselves? Surely there are items in your closet that are just taking up space. Understandably, many seamstresses form attachments to their garments, after toiling to create them, and find it difficult to even contemplate the idea of cutting them up. However, if you are one of these, ask yourself these questions:

1. When is the last time I wore this costume?
2. Does it still fit me?
3. Does this costume accurately represent my sewing prowess?
4. Does the style, decoration, cut, period, etc. still appeal to me?

Be honest with yourself. It may be time to remodel the dress. It could be a matter of remaking the same gown but *better* or it could be crying out to be made into something completely new!

Sometimes a length of fabric will go through many incarnations until there is literally nothing left. Maggie of Serendipitous Stitchery believes in this practice to a high degree: one set of old sheets has been made into two 18th c. gowns, a Victorian corset, and the linings for who knows what else!

Check out these other recycled gowns from my own costume closet:

The Dickens Disaster Turned Robe a L'Anglaise
What It Was: Originally 5 yards of upholstery taffeta, I threw together in a few days the worst costume in the history of the Dickens Fair. It consisted of a modern blazer with badly altered sleeves, and an enormous skirt gathered on a drawstring and tied around my waist. I topped it off with Vatican-sized gold bonnet. The worst part is that someone working in one of the shops complimented me, asking if I'd made the ensemble myself. I now know she and her friend had a good laugh after I'd left.
What It Became: An 18th c. Robe a L'Anglaise, of which I am mildly proud.

The Not-Quite Flemish Peasant Turned English Middle Class
What It Was: A quick costume put together for reenactment with my first guild at Renaissance Faire. The overgown was navy blue tweedy-something, lined with and ochre linen blend. The kirtle was some kind of weird linsey-woolsey. The kirtle was made once, then remade the next week after the Snark at Costume Check snarked about the neckline. At the time, I was quite proud of this costume, and wore it many times.
What It Became: This is a case of the costume no longer representing my sewing skill. After scrapping the light blue kirtle, I separated the MASSIVE lengths of ochre and blue, making the former into a skirt, and the latter into a new gown to wear over. This gown is actually reversible, and I love this costume to pieces.

The Gold Venetian Turned Elizabethan Bodice
What It Was: Seven yards of gold jacquard bought on sale and years later made up into a sortof-kindof 1490s Venetian gown. I had a tiny bit of the fabric left, so technically I didn't cut this gown up, but...
What It Became: An Elizabethan doublet with black velvet trim. Currently this doublet is worn with a black skirt, but if I ever decide to construct on overskirt for the costume, that old Venetian is on the chopping block!

Other examples are made from bits of this, pieces of that, but those morsels will be kept for another entry!

So how much yardage do you have sitting in your closet? It is not a crime to make your old costumes into new ones. It will save you money in the end, and you will have a brand new costume to wear in a fabric you love! Post links to your costume remodels in the comments section!
Miscellany