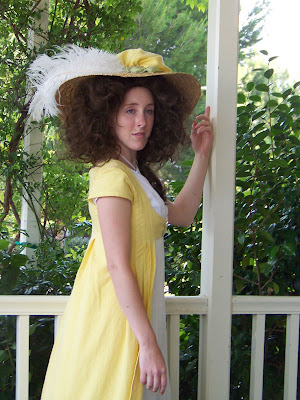 Hooray! The first wear of the 1795 linen robe and voile gown ensemble, complete with 18th c. Hair of Great Enormity, and the curved-brim Great Hat! 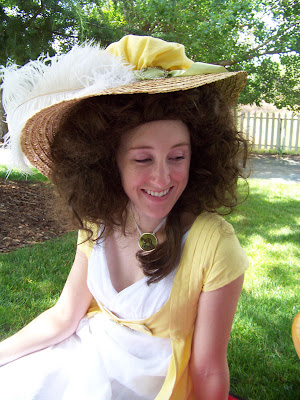 I know I've been bad in not posting the progress photos of the voile gown. I will give you the specs on it now, and be sure to take pictures of the construction of it a bit later: 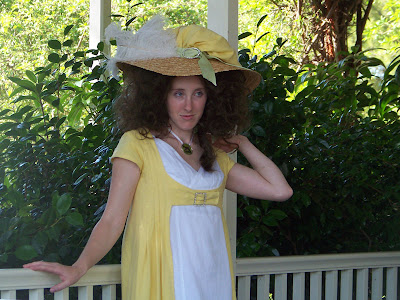 The gown is a wrap-front dress with low, v-shaped decolletage. There is an extension on either side of the front crossing pieces that wraps around to the side seams and fastens with hidden buttons. As was the style with the 1790s, the skirt of the gown is gathered from side seam to side seam across the back, instead of just between the side-back seams as became the mode soon after. Originally I had gathered the skirt entirely around, but as that resulted in me looking like a hunormous, tubular marshmallow, I opted for a straight-front. The gown is made of voile, with a light muslin lining for the bodice, and no lining for the skirt. It is worn over my Regency undies, which did wonders for keeping the appropriate lines for the dress. 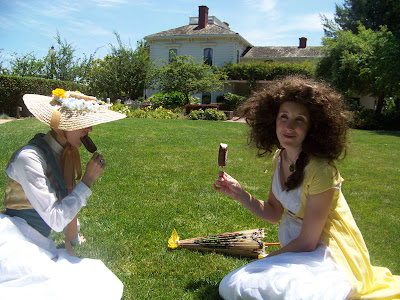 Now for the robe, which I've not been remiss in updating. Much hand-sewing went into the completion of the robe, including tacking down the pleats, turning under the armscye edges, and finishing the raw interior edges of the cross-pieces. I closed the robe with 3 hooks n' eyes - two on the overflap, one underneath - and ran the front overflap through a square rhinestone buckle for a little extra pizzazz. As mentioned in previous posts on this robe, it is unlined and so lead to unique challenges with pulling and finishing that I will not have on the final feathered version. I also had to considerably reduce the yardage in the back - single box pleats instead of doubles and triples - due to my mistake in measuring when I ordered the fabric. The final robe, of course, will have the proper number of pleats in the back, as well as the longer train. 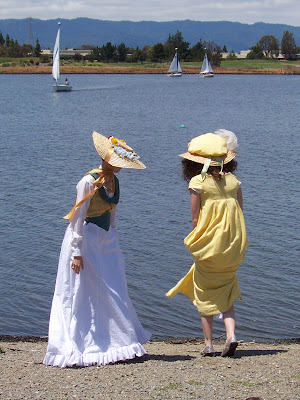 You've read about the Hair Cloud already, I wager. It was...not the easiest thing to wear. It itched, primarily, and I will obviously need to sew some wig-clips into it before another event. The main problem was with the hat, however. I did *not* make a hairpin afterall, lazy soul that I am, and so the hat was falling off my head all day. I ended up shoving the quill of a turkey feather through the hat and into the wig, but that did little to keep it on! Solutions will have to be engineered at a later date. 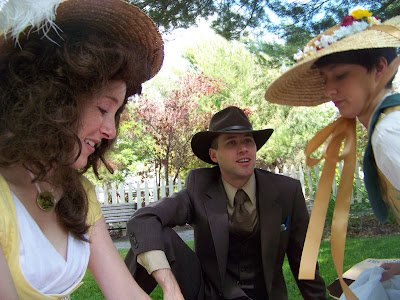 As for the piquenique, it was great fun. Myself and my partner-in-crime, Maggie, have been organizing summer picnic events, this being the first in this season's series. What better than to spend the day with friends, some costumed othesr not, to nibble gourmet cheese, and to enjoy the incredible, mild, sunny June weather? It was a treat. Maggie looked resplendent in a costume she threw together literally overnight! See all the details at her blog, Serendipitous Stitchery. 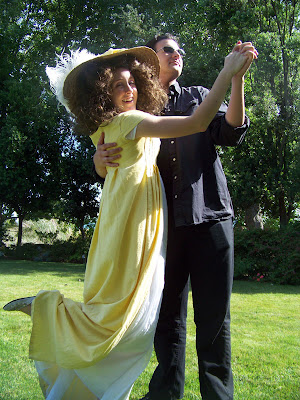 If you are interested in joining and attending Le Societe de Pique-Nique events, join the Facebook group and check out le Blog de PeekNeek. The next event is at the end of July, at the Rosicrucian Egyptian Museum in San Jose, CA.
18th Century Events Regency Yellow Open Robe