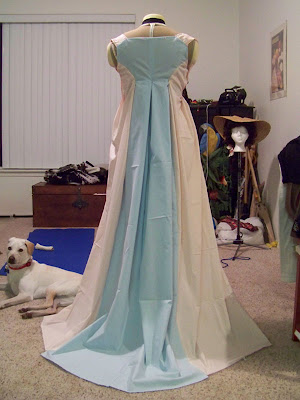 The time has come to create the pattern for the 1795 Open Robe! I printed out my scan of the Janet Arnold "Patterns of Fashion" robe and was pleased to see that it was pretty much straight panels of fabric with some pleating. Not so very hard at all! 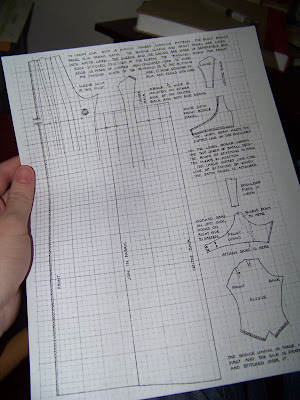 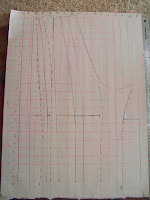 This is the first time I have scaled up a gridded pattern from a book. My first attempt, I actually drew the grid out on a piece of newsprint, and painstakingly drew in each little line per grid box, which took forever. The pleating lines on the front of the robe pattern are not straight, but curved, which proved especially "fun." My second attempt, for the back piece of the pattern, I spent 20 minutes digging out a pad of 18x24 Vellum buried deep in the underbelly of the bed, amongst a graveyard of old art projects and dust bunnies. Vellum is a dream paper for patterning - it's far heavier than tracing paper, but just as transparent. Unfortunately it's expensive, and I'd bought this pad many years ago for art school, used one piece of the stuff, and stashed it. I'm happy to find a use for it now!

I wasn't about to draw out another grid, so I got out my rotary cutting mat, which I rediscovered had a convenient 1" grid on it, and layed a piece of vellum over it, taping the paper down. The second piece of the pattern, thus, emerged at least three times as quickly.

I pulled out what used to be pretty floral sheets and cut out my two pattern pieces, then proceeded to pleat and pleat and pleat some more, coming quickly to the realization that this pattern was deceptively hard and OH MY GOSH WHAT HAVE I GOTTEN MYSELF IN TO!? I tossed the drafted pattern pieces aside in frustration and went to draping my "better" version of at least the front piece of the robe. I mean, how hard could it be, it's just two strips running down the side of the torso and a little wrap around to the side-back seam.......right? 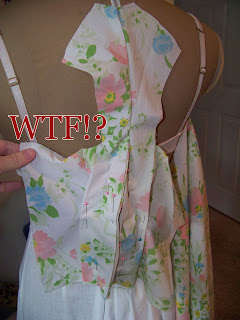 WRONG. One of the most appealing things about this pattern, to me, is how the bodice seams are tight through the back, then flare out into the beautiful double box pleats and all the way down into the skirt, with no seam at the empire waist. No seam at the waist makes this loads more difficult, and I realized that all that pleating on the front shoulder straps, for the original pattern, was indeed necessary to allow the skirt to fall over the hips and to the floor in the way it is supposed to.

It was then that I realized, in all my internet searching and dress diary stalking, that I had seen a handful of open robes, all based on the Janet Arnold pattern, but all of them had been simplified. All had a seam at the waist, and the front pleating had been taken out or greatly reduced. However, with my stubborness and insistence on princess seams, I forged ahead....

So I picked up my discarded original Janet Arnold pattern pieces and tried again, free-form pleating with the lines as a loose guide, and fitting to my dress form as I went. The back piece, thank goodness, really is fairly simple, but I found that it was TINY. The lady who wore this robe originally must have been 4 feet high! Luckily, I had draped a back piece and was able to cut, splice, tape, adjust, and smash together my draped pattern and the original Janet Arnold pattern to create a final pattern that actually worked. GLEE! 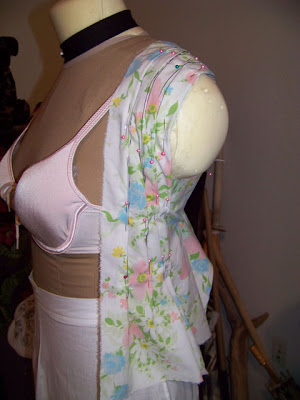 Note: I did not create a paper pattern for the entire length of this robe, which is nearly 2.5 yards. I patterned the bodice only, and then extended 45" from the bottom of the pattern, which ends at the natural waist. The extensions are just straight panels, so it was quite easy.

Now, I know that costumers work off their draped fabric pieces and add seam allowance as they cut and all that, but I like to have paper patterns all worked out before I cut anything. This pattern presented a challenge for transferring to paper, however, because of all the irregular pleating lines. Vellum to the rescue once again! I simply put a piece of vellum over the top of the fabric piece and traced away, then removed it, added seam allowance, and that was it! 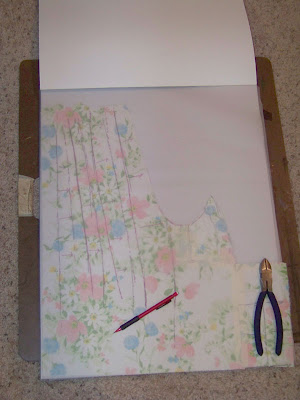 Of course, those lines must then be transferred to the fabric of choice. To do this, I traced over the pencil lines on the vellum with a black Sharpy. I could see the Sharpy through the thin cotton sheeting, which allowed me to trace out the lines again onto the fabric. For my cotton toile I traced them in Sharpy marker, but for the final fabric definitely use a light pencil or something that will not be seen or will wash out! 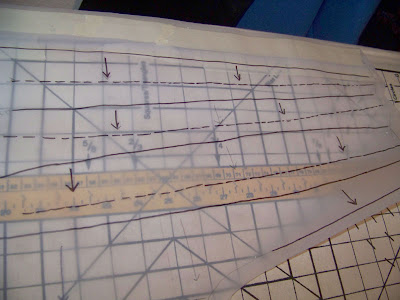 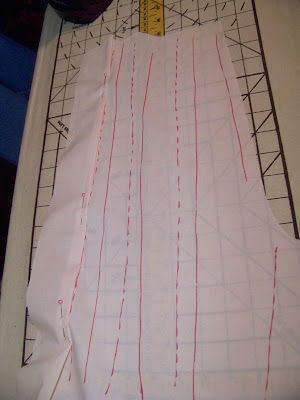 With all the markings transferred, it was just a matter of pleating it up and sewing it all together. I did not pleat and press the double and triple box pleats in the back before sewing the edges together, but I would recommend doing so, since it'll be easier to wrestle them into place if they are pressed in the proper shape already.

I made some adjustments on the straps, to get the back panel to fit snuggly across the shoulders, but other than that, the thing actually fits. I have yet to make the front piece that crosses under the bust to keep the robe closed. Right now it's held together with two handy shoelaces. But golly, how does it look!? I'm truly amazed at how gorgeous this thing is already, and I almost can't believe I successfully scaled a Janet Arnold pattern all by my lonesome. 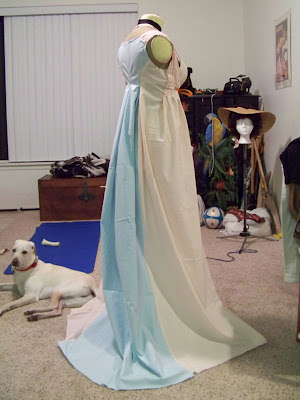 One little kicker - I am pretty sure I ordered not nearly enough yellow linen for the summer version of the robe. The fabric is 54" wide, so folded in half that's 27", and that's not enough. Boo. One solution is to reduce the triple box pleat at the center back to a double box pleat. I will have to see if that works when the fabric gets here....
18th Century Regency Yellow Open Robe