Following the uber-popular "Tavistock" boots, the time seemed right to introduce a variation for Summer - c. 1890 - 1920 cloth-topped boots in black-on-black or brown-and-tan.

Cloth-topped boots, sometimes called "galoshes," developed from early leather-and-fabric gaiter styles. You're all familiar with the early and mid-Victorian foxed booties with bits of leather on the toes and sometimes heels - this practicality continued into the late Victorian period with the heel and toe foxing eventually meeting so the whole bottom of the boot was leather.

Part of this was also fashion. Women's cloth-topped boots came along a little after men's, as the popularity of women's tailor-made, menswear-inspired clothing grew. In addition, women were participating in more sports and often wore spats for activities such as cycling. Sporting fashion carried over into daywear, with boots like these combining the shoe + spat look.

Cloth-top boots became widely fashionable in the 1890s and reached the height of their popularity between 1910 and 1914 (Rexford, 2000). Tone-on-tone colors such as black, tan, and white were popular as well as two-tone versions such as black/gray, brown/tan, and black/white.

By the late 19teens, button boots in general were falling out of fashion, with the very last persisting to the early 1920s but no further. (I noticed in the "Everday Fashions" Sears Catalog books that the illustrated models are still wearing what appear to be either two-tone button boots or spats over shoes until 1921, but not afterwards except for a rubber rainboot overshoe with side buttons in 1922.)

As always, our new "Manhattan" boots are based on original examples. My antique button boot collection has been growing, and an original black-on-black pair stood for the patterning of our reproductions.

The Manhattans share a last with Tavistock, but we've made a few changes. The heel is the same shape and height - 2 inches - but is covered with leather in a faux stacked design. The soles of Manhattan are real leather with a double thickness under the ball of the foot, and a welt top stitch. Manhattans do not come up as high on the leg as Tavistock, and we have omitted the use of elastic. Don't worry, though - you can still fit the ankle and leg by moving the buttons, either taking them in or letting them out: there is a 1 inch overlap on the button fly to allow this. 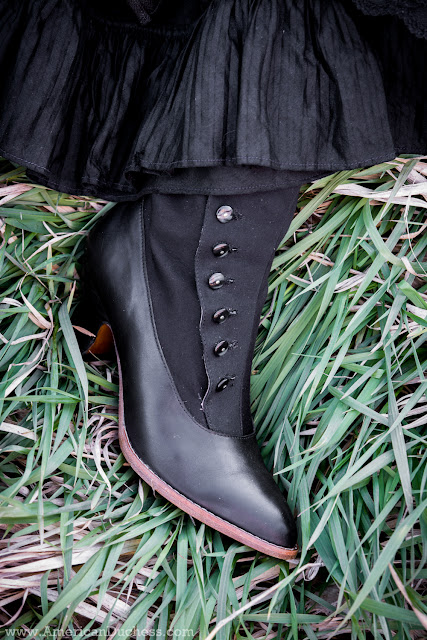 Manhattan boots are opening for pre-order on Thursday, April 14. We have them at an introductory retail price of $160 and, in addition, you will have your choice of a free pair of stockings or a $10 discount as a "thank you" for placing your order early. The boots will arrive in July.

Watch this space, your inbox, or Facebook for the announcement!