I recently had the amazing opportunity to interview Mary Johns, the costumer for the independent film series "Courage, New Hampshire."  Mary has created not just one or two pretty things for the film, but a whole wardrobe, all with attention paid to historical accuracy.  In her own words, here is what Mary has to say about costuming for "Courage."  Enjoy! 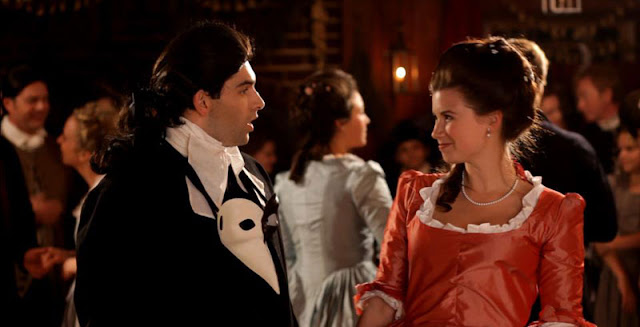 1. How did you get started in historical costuming?  What drew you to it?
Well, it started when my mother dragged me kicking and screaming to check out a job at Riley's Farm. They were looking for high school aged homeschoolers to be Living Historians for the Revolutionary War Adventure (which is a 5Th grade level hands on field trip). The first winter all of the girls gathered up at the farm to sew our costumes. A shift, petticoat and bodice...it went from  there, and as the farm grew I started making more of the costumes for the new historians. I of course needed more costumes for myself, and I became very interested in making us more accurate. We graduated from the bodice, to frumpy sleeved shortgowns (no stays, and a bad drafting job), and have worked very hard to improve from there.

I loved how the clothes we wore drew the kids into the history we were trying to teach them, and allowed us to really show them that history isn't just a bunch of boring dates and events.

2. How did you become involved in costuming for a film production company?
Mr. Riley is one of the producers of our films, and as the farm costumer, it just naturally fell to me to costume the films, which are shot at the farm. 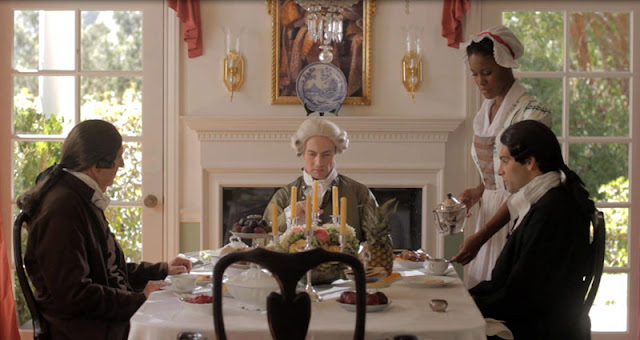 3. How do you go about research for your production's costuming needs? What is your opinion on historical accuracy for film?
The research has been on going since I first started wearing the dreaded bodice. It has been an evolving thing for the last 13 years. I have a lot of costume books (never enough, though!), and do research on line. I went to my first Costume College last year (put on by Costumers Guild West), and really enjoyed taking some classes on 18Th century clothing. I wish I could say I have been to tons of cool museums and touched all their clothing, but I haven't. It is something on my to-do list, and hopefully I will be able to get some hands on research soon!

Historical accuracy in film... I was watching an 18Th century film the other day, and some of it was so good, but some of it would have been so easy to do better. I might be one of the few to notice the mistakes (since I really pay attention and am a little bit...hmm...shall we say picky?), but sometimes it's the little things. Like the stripes going up the sleeve instead of around it, and the civil war type hoop under the gown with the bones of the hoop showing through.

There was one shot of the militia marching through town, and they focused on the feet marching. One of the gentlemen had modern shoes on, with the little elastic gussets at the tongue. They were black, but they were focusing on FEET. It could have been a cool shot, but that kind of ruined it for me. I get into little nit picky discussions with one of our crew about authentic versus artistic. I am trying to keep the clothing as accurate as possible, but sometimes we have to take a liberty to get a point across to a modern audience, or to convey a certain character. We try to come to a happy medium, with the authentic meshing with the artistic. 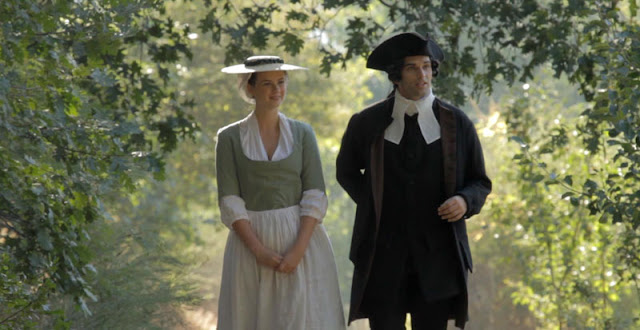 4. What is your typical day like as a film costume designer?
Well, most of the time we are just trying to keep our tour staff in proper attire. When filming rolls around, and we get the script (two weeks ahead...maybe...!), we start planning for any new characters, and anything special we need for existing characters. This next episode is a masquerade ball, so we needed some fancier gowns. The two weeks prior to a film are generally spent sewing like mad to get everything done on time. We always have extras, so when a lot of our stock is checked out to our Living Historians, we have to make sure we have enough to properly attire everyone. Which is tricky if we don't have nearly enough stays or coats or breeches... The extras are always my toughest problem, because I can't always dress them as accurately as I would wish, just because we don't have the time to make everything we need. A typical day is hard to say, as it varies so much, but a filming day is usually 12-15 hours long. It starts with getting all the primary actors dressed, then the extras. When they are done we will work on things we need for coming film days. At the end we undress everyone, make sure we get everything back, check if need to do any laundry, do it, and prep for the next morning. I have a 3 man team (me and my two sisters), and various other crew pitch in as they can.

5. What is your favorite type of 18th century garment to sew, and why?  Do you prefer the men's costumes or the women's?
I don't know that I have a favorite garment in particular, but when I get a fabulous fabric, or a new garment to try, it keeps things interesting. I love sewing for my 2 year old daughter, I just finished a shift and cap for her, and they are so cute! So I guess it depends on how many of a particular garment I have made recently, and who it's for. I prefer the women's clothes, but I don't mind the men's. My least favorite garments are stays and coats. I love the way they look when they are finished, but they can be the bain of my existence. 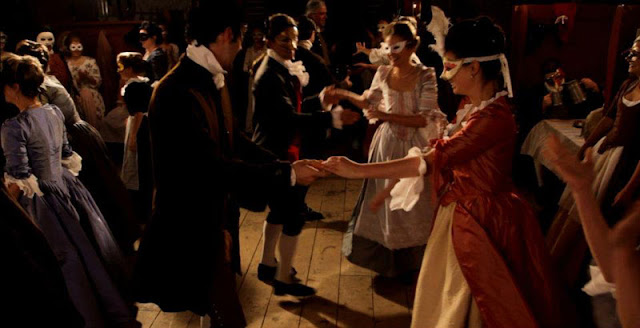 6. What are your favorite materials to sew with?
I love silk taffeta!! The pleats...the crinkle...the crispiness! And the last batch of wool we got was so buttery soft, it was hard to get it sewn because you just want to sit there and pet it! 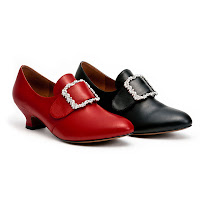 Mary's work can be seen in Episodes 1 and 2 of "Courage, New Hampshire," available for online viewing at the Colony Bay Productions website (here).

You can also WIN a free DVD set of "Courage, New Hampshire," along with your choice of new red or black American Duchess "Kensington" 18th century shoes by entering the giveaway here - winner to be drawn on March 12. 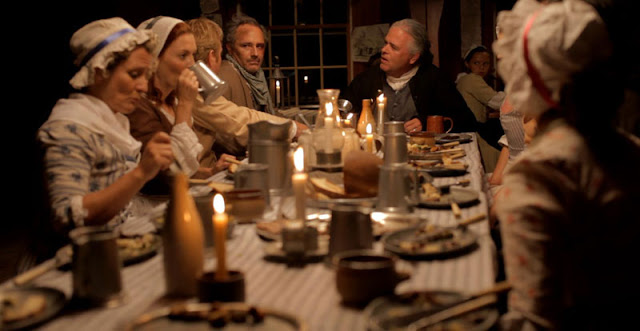